Lua error in package.lua at line 80: module 'strict' not found.

This article has contents related to Forkies.
➜ To report a rule violation, please join the CollabVM Discord and ask a moderator about it.
➜ Some articles about forkies may be slanderous. Help us by removing the slander! 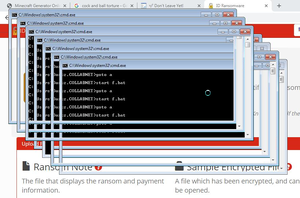 An example of a CollabVM machine after being destroyed by a "Forkie".

Fact: Forkies used to look like this, before they became humans. (Shikashikashika~~!)

A "Forkie" is a nickname typically given to someone who maliciously causes destruction or otherwise renders the virtual machines unusable to annoy, intimidate and/or troll users of CollabVM. They are often categorized by CollabVM users into Fags.

Although their name derives from the term "fork bomb" (and was the original definition of Forkie), they do not exclusively run fork bombs. A forkie may also run an executable which prevents anything from opening, deleting the registry, or other methods of blocking usability on the VM.

Not too long ago, a vote to reset button was added to combat forkies along with a customized task manager (and later a customized command prompt), which is mostly actually successful at defeating nearly every forkie, although a forkie will eventually figure out how to bypass it and break the VM again immediately afterwards.

Forkies were not only present on CollabVM - they were also known to be present on the similar (but now defunct) website known as socket.computer, wecan.hasthe.technology, the Virus Farm and the like.

Is being a "Forkie" a bannable offense?

Many users have questioned if being a Forkie is a bannable offense.

The short answer is: If the moderation team is online, sometimes but mostly no.

The long answer is that, if you have a very long streak of making the VM unusable, you might be banned. Or if you break a global site rule. For instance, creating an executable which DDoSed someone (assuming someone would have already knew about your intentions and reported it to the administration, or the administration is on the VM and has recognized it as a DDOSing attempt), you would likely be banned permanently.

Nowadays, there is now a rule in place on the site, dubbed Rule 9 of the CollabVM website, in which if you constantly make the VM unusable, or run a banned script, or attempt to install another operating system over the VM's OS (installfagging), it is constituted a rule violation.

While uncommon, constantly breaking the VM can also result in a ban, if a majority of members vote to have you banned from the VMs. This usually only happens however if you excessively abuse the VMs. You won't be banned for simply running malware or fork bombs or whatever once on the VMs, though others will find it very annoying.