From Computernewb Wiki
(Redirected from How to install Ubuntu 14.04 in QEMU)
Jump to navigation Jump to search 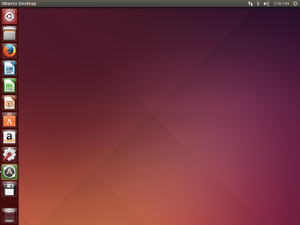 Due to the "noob-friendly" nature of Ubuntu, Ubuntu is a good choice for a Linux VM. It runs fine as a VM on CollabVM.

Users may frequently run the infamous "sudo rm -rf /" command. There is no easy way to fix this other than to enable vote reset and install safe-rm.

Sudo normally requires a password but you can add a line in visudo to not require one.

If you're using Ubuntu, the Unity login screen breaks if you do not have a password set on a user account. You may want to use gdm instead.

40 gigabytes is enough for a normal VM.

We set the RAM to 2 gigabytes (2G) which is good enough for a standard 64-bit installation. For a 32-bit install you can lower it to about 1 GB. If you're using Unity however, don't set it lower than 1 GB because Unity becomes unresponsive with low amounts of RAM.