How to install Windows 11 in QEMU 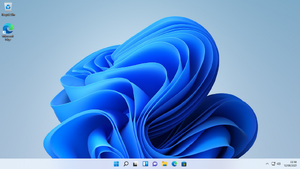 Windows 11 is an operating system created by Microsoft which was officially released on October 5, 2021. The first build of Windows 11 (Build 21996) was leaked sometime in June 2021. It is the latest version of Windows.

Windows 11 works alright, but can be somewhat slow on QEMU even with KVM turned on. Disabling and uninstalling unnecessary background applications helps fix this problem. VM6 currently runs the 22000.556 build of Windows 11.

Windows 11 is exceedingly slow without virtualization, so if you don't have root/KVM/Xen, speeds are not optimal.

Recommended version if you meet the requirements: Latest version (Pro)

Recommended version for if you don't meet the requirements: Version 22000.184 (Pro) 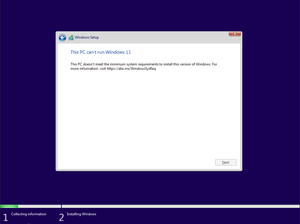 If your VM does not have TPM 2.0, Secure Boot, or 4 or more GB of RAM, you will need to use a few registry keys to bypass these checks during the setup. When you boot into the setup, proceed until you are the license agreement. Press Shift + F10 to open Command Prompt, then type regedit. From there, go to Computer\HKEY_LOCAL_MACHINE\SYSTEM\Setup, create a new key called LabConfig, and then create the following DWORD values:

Type exit and hit enter to exit the Command Prompt. You should now be able to proceed with the installation.

You can also manually deploy the image using Command Prompt. You can follow this handy guide on how to manually install Windows 11 without the graphical setup.

Windows 11 requires some disk space, you can make this 40 gigabytes if you want, but it is recommended to have at least 60 GB for users to install programs onto.

Or if running without root or virtualization:

8 gigabytes of memory is highly recommended for optimal performance, but you can use 4 GB if absolutely necessary.

It is recommended to install the Pro version, however you can install the Home version if you want. Note that you will need to sign in with a Microsoft account when you get to OOBE.

Or if running without root or virtualization:

Setting up your VM

Also, if you want to make this a UserVM, it's recommended to install Google Chrome, as many people who will use your VM will most likely prefer Chrome, and will install it if it is not present.