OS/2 Warp 4 was the fourth major edition of the OS/2 Operating System. It was developed by IBM, and was released on the 26th of September 1996, with the last minor version (4.52) releasing November 2001. Sales ended on the 23rd of December 2005, with support ending a year later. OS/2 has continued to be updated by separate companies, and released under new names. First, eComStation, and later ArcaOS. 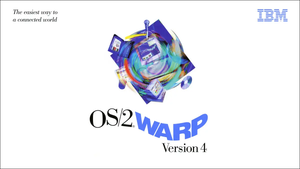 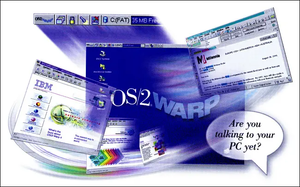 It was developed as a direct sequel to OS/2 Warp 3, released two years before. It added enhancements to the operating system, including updates to the Workplace Shell and the Synchronous Input Queue (SIQ), preventing the GUI from freezing. It also included Java Development Tools and Speech Recognition Software built-in. It introduced the "WarpCentre", a sort of taskbar equivalent.

This release ended up being the last major version. Windows 95 was out and performing well, and overall this release broke the camel's back. Development was effectively halted and 1,300 would be fired, with an entire development lab being eliminated and funding cut by 95%. This was due to an internal study that took place in IBM, with the primary concerns being large code quality issues within OS/2, as well as ineffective development organisation at IBM's development labs in Austin and Boca Raton.

After discontinuation, IBM recommended customers (at this point mostly business customers), to rewrite their programs and move to Linux.

Earlier versions of OS/2 were marketed as "a better DOS than DOS and a better Windows than Windows". This is because of in-built compatibility layers available for both DOS, and Windows 3.1 applications. This allowed instances of both to be created inside a window (called a DOS Box), with applications running within. It allowed multiple simultaneous instances of both, all running at near native speed. Of course, the number of instances that could be run depended on the speed of your computer.

It had very good compatibility with most applications, to the point where it was thought this actually led to less OS/2 software sales.

So, you want to try out OS/2? Bare in mind, it's a historical operating system, and it requires a bit of a learning curve to get a handle of. Naturally, you won't be able to run modern software.

The software is abandonware at this point, and so there's nothing really wrong with downloading a copy from (for example) WinWorldPC or the Internet Archive. You'll to grab OS/2 Warp 4.52, more specifically build 14.089 or 14.106, as this will reduce the number of updates required.

Your copy will most likely contain either 2 CD (images) or 1 CD and a couple of floppy diskettes.

At this point you need to decide how you're going to run the OS. The easiest option is virtualisation, and that what we'll cover here. You can run on physical hardware, but make sure you plan as to what drivers and extra software you'll need.

The process of installation is similar on most virtualisation platforms, and OS/2 Warp 4 also works well on QEmu and VMware. Virtualbox is not recommended. However, if you are running Windows 8.1 and lower, Virtual PC 2007 is a very good option for OS/2, as it includes Guest Additions to allow greater video performance, and well as shared folders. PCem could also be used.

If you want a quick way to try out OS/2 on VMware, a premade disk image is also available here. It comes installed, with some software included.

At that stage, we'll create a new virtual machine and verify we have the right discs.

If you have 2CD's then you should have one labelled "Boot", and another "Install", keep track of them as we'll be flipping between them quite a bit.

At this point the VM won't do much beyond goto into PXE Network Boot. So let's start the initial install, it's gonna take a while. Now this guide assumes you have a copy with 2 CDs, if you have floppy disks, just follow a similar process, but insert the required floppy disks at the right time, starting with the boot floppy.

And with that, welcome to the installation program, and the first step, partitioning, with probably one of the worst partitioning programs ever created.

Let's enter the inner machinations of an IBM employee, and partition the disk.

At this point we can press F3 to exit the program. Make sure to select "Save the changes and exit". Now the system must be restarted.

A word of Warning: OS/2 WILL reboot WHENEVER you hit the Ctrl-Alt-Del keys, it doesn't care what you're doing, so be careful!

The VM will reboot and proceed to system configuration. 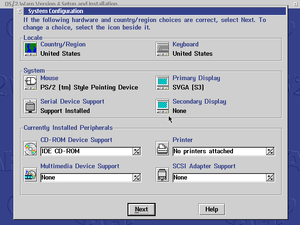 We'll sort out the options from left to right.

We're now presented with a rather confusing configuration wizard so we'll go through step-by-step. 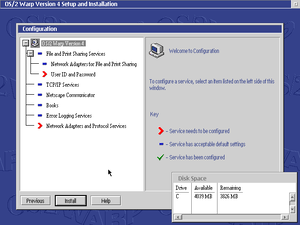 At this point it should all be configured, and you can proceed to click install.

Now it's time to wait, after installing everything, the system will reboot and boot off the drive... to continue installing. All the features (and web links) will pop up across the bottom. After this, yet another reboot, but finally we can use the OS... never-mind.

A couple of dialogue boxes will open, so let's deal with them.

Once this is all done you can reboot again.

Finally we can install Virtual Machine Additions for OS/2 via the "Action" Menu. This will install some drivers to allow better mouse support and shared folders.

OS/2 Warp is quite old at this point, and so many basic things are done in different ways compared to contemporary operating systems. Here's a guide on actually using the OS, to do things.