How to install Windows 98 in QEMU 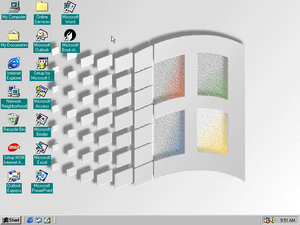 This page details how to install Windows 98 in QEMU. Windows 98 is an operating system created by Microsoft released in June 1998. There is an updated version dubbed Windows 98 Second Edition, which fixes some bugs and adds new features. Support ended in July 2006.

After installing, follow this guide to have smooth mouse movement.

1G can be replaced with however big you want the hard drive to be (with G standing for Gigabytes). Windows 98 is a very old OS and does not take up a lot of space.

You can also use VMWare graphics adapter instead of Cirrus if you have the drivers available.

We set the memory to 128 MB, but it can run on as low as 8 MB of RAM, although this isn't recommended if you want to be running any programs.