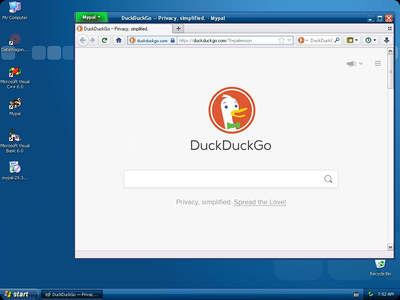 Mypal is a fork of Mozilla Firefox ported to Windows XP by Feodor2. The latest version is based on Firefox 68 Quantum. The browser was previously based on another fork, Pale Moon, before switching to Firefox Quantum.

Versions before 68 were based on Pale Moon, another Firefox fork. The latest and final version was 29.3.0 based on the respective version of Pale Moon. Like all browsers based on UXP, it uses the Goanna rendering engine, a fork of Gecko. Due to the Pale Moon developers disliking the creation of forks for the use on Windows XP, and older operating systems in general, they decided all of a sudden that the browser was no longer in line with the MPL (Mozilla Public License), and therefore created a GitHub issue to complain about it. This, as well as the developer realizing that porting Quantum to XP was more feasable than previously thought, caused the switch to Quantum.

Versions 68 and above are forked from Mozilla Firefox Quantum, version 68. This does however mean that the browser no longer supports Plugins. Like Quantum, it uses the Gecko rendering engine.

Mypal is the default browser on VM2, Running Quantum Mypal. Before the switch, it used legacy Mypal.