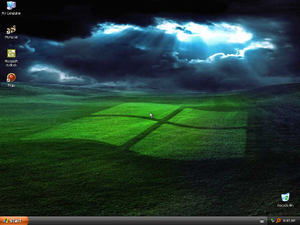 VM2 is the third VM in CollabVM. The VM currently runs Microsoft Windows XP Professional x86 Service Pack 3, and contains all of the Windows XP updates, including POSReady's, up to 2019. The VM contains several preinstalled programs, including Visual Studio 6.0 (Visual Basic and Visual C++ 6), Bloodshed Dev-C++ 5.11, Mypal 68 (a variant of Mypal (a fork of Mozilla Firefox 68) for Windows XP), the Microsoft Plus! pack, and several custom themes from the Integral Edition. Along with the other Windows VMs (except VM 0b0t), the user has a disk quota set to be able to use only 15 GB of space, and the VM really has 50 GB of space, the second-lowest (taking true space into account) of any other VM, just surpassing VM8. The VM has the theme set by default as the Royale theme. It has 2 GB of RAM and comes with a QXL graphics card, allowing it to run some basic 2D applications.

It is the only preinstalled VM that does not come with Google Chrome or Mozilla Firefox unless MyPal is counted (although it used to come with both browsers).