How to install Windows NT 4.0 in QEMU 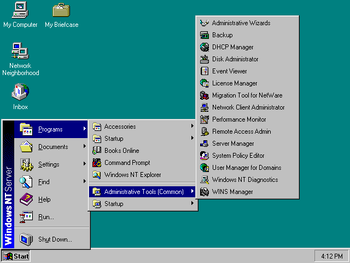 Windows NT 4.0 is an operating system created by Microsoft, released on July 31, 1996. Support ended on various dates but the embedded version ended in July 2006.

Windows NT 4.0 runs stable in QEMU but has a problem involving the mouse. Like Windows 95 (and 9x/ME in general), the mouse does not position correctly (but still works). This is due to Windows NT 4 not having USB support. There exists a driver for Windows NT 4 which adds USB 1.1 support, which will fix this problem.

If one chooses to not use an emulated tablet mouse, another problem is that occasionally the mouse will become very glitchy and move erratically, right and left clicking rapidly and making the computer completely unusable. This glitch tends to happen more on RTM-SP3 much more frequently, so it is recommended you install at least SP5 or above.

Another issue is that almost all modern programs do not run on this OS. Unlike Windows 9x and Windows 2000, there is no KernelEx or mod for this OS to run modern programs, so you'll have to find old programs compatible with this OS.

Other than that, it works fine for a VM. CollabVM has ran Windows NT 4 before on Experimental and on Windows Server's 20th Anniversary.

There is also a MIPS version of Windows NT which runs in QEMU.

700M can be replaced with however big you want the hard drive to be (with M standing for Megabytes). Windows NT 4 is not a space hog or resource intensive, being such an old OS - you can even make the disk space as low as 100M, but this is unrecommended. Windows NT 4 RTM-SP4 does not have support for FAT32 so if you want more than 2 gigabytes of space, install SP5 and above.

Windows NT 4 does work with KVM, but it is very unstable and crashy when it is used, so it's not recommended. This command does not require root or virtualization.

We set the memory to 128 MB, but NT 4 can run with 64 MB if you want. Theoretically the maximum for Windows NT 4 is 4 GB of RAM, although it is really not a demanding OS by any means so 4 GB of RAM is overkill.

VGA is set to Cirrus, but you can use -vga vmware if you can find a driver.