Virtual Server 2005 is an unusual specimen based off of Virtual PC, that is designed to be a server variant of Virtual PC, except for the fact it's more of a pain in the ass to use and requires you to install an vulnerability on your computer (IIS 5.x) in order to be able to use it. 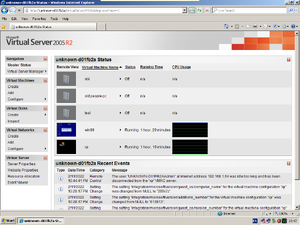 Due to the IIS 5.x requirement, this only works on Server 2003 and XP, it will not run under any other operating system due to compatibility issues and the short lifespan of the program itself. (tl;dr no one used this piece of shit because it sucked too much)

VMs are controlled by using the VMRC protocol (modified VNC with NTLM/Kerberos slapped onto it), however unlike regular VNC it's a lot faster in terms of screen updating in some cases even on really bad connections.

Virtual PC and Virtual Server VMs are both compatible within eachother (as long as IDE is used) as the base virtualization component is identical to it's Virtual PC counterpart. 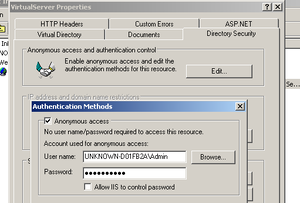 The workaround for fixing the broken DCOM component auth issue, this makes a new vulnerability but it allows you to logon and use the program

How to use on CollabVM

Currently, it's not possible to use Virtual Server 2005 VMs on CollabVM, unless someone manages to make an compatible VMRC client which covers NTLM authentication as well, however using a VNC server inside the VM itself works too, but it won't perform well. See the Virtual PC 2007 page for more information.