Inside src/Database/VMSettings.h, there is a declaration for a string named "Description". However, it appears no code was written for it.

However, by adding HTML tags after the Display Name of a VM, it is possible to create something like a description. This is frequently used in UserVMs.

Before the removal of ODB, there was a commented declaration for "FrameRate" inside src/Database/Config.h.

The red "Administrator" rank was officially added back into CollabVM Server version 1.2.9.

The blue developer role only exists in the CSS, and no trace of it exists in the server. Presumably, this color would have been used by Cosmic Sans, Dartz, and Geodude. 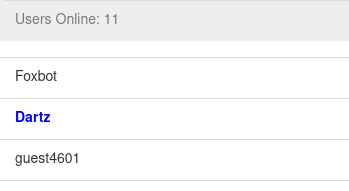 There is a reference to a "RegisteredUser" role in the server, so there is some support in the server for it, although there is currently no way to activate it through normal means. It is rather difficult to distinguish a guest user from a normal user although if you look at it very closely, you can tell a user has a darker shade of black than a guest.

This suggests that at some point, guests were meant to have different colors than registered users.

A "Connect to Monitor" button is present in the admin panel but is commented out. This was presumably used in a very early iteration of the Admin Panel as the panel automatically connects to the QEMU Monitor in newer versions.

Presumably would allow you to prevent username changing on the VM. No code for this function exists in the server.

Presumably would allow you to prevent using the virtual Guacamole keyboard. No code for this function exists in the server.

Alongside "Restore on Shutdown", a feature to restore a VM periodically is present, but commented out in the source code. Code for this feature is also present in the server. It allowed you to automatically restore a VM every x amount of hours and x amount of minutes. This would have a similar function to socket.computer which restored every 15 minutes. This feature was never finished and does not work correctly.

This would presumably allow you to disable the internal web server. No code for this function exists in the server.