How to create a disk image in QEMU

This page documents how to create a hard disk image in QEMU.

The standard command for creating a basic hard disk image is this.

It will create an output similar to this: 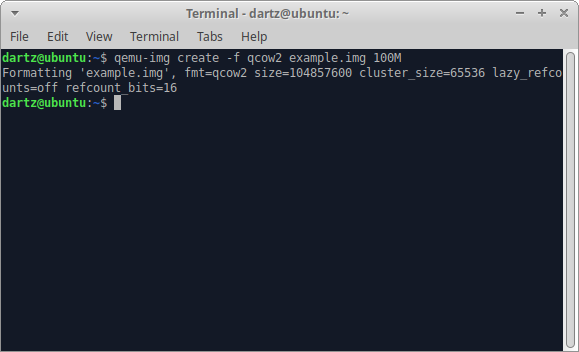 How the command works

This is the name of the program. It is necessary for using the following command.

This tells qemu-img that we are creating a disk image.
Other arguments include "dd", "info", "map", "measure", "snapshot", "rebase", and "resize". There is no documentation for these arguments for now, they will be described in more detail later.

An argument that specifies which file format we are going to be using.

The file format we are using, in this case qcow2.
qcow2 is the recommended since it is dynamically allocated - e.g. it only allocates space when needed, but at a (pretty much) unnoticeable speed loss. There are many other file formats, which will be listed below.

This specifies the name of the image we are going to be using. It can be whatever, and have whatever extension (or none at all), it doesn't matter.

This specifies the size of the virtual disk. 100M stands for 100 megabytes. Of course modern operating systems take up much more than that, so it's recommended to make it at least 30 gigabytes or more, which can be done by replacing 100M with 30G.
The following letters are accepted:

K stands for Kilobytes. For instance, 100K would be 100 kilobytes. Unrecommended. You can create hard disk images in pure kilobytes if you wanted, e.g. 30000000k for 30 gigabytes.

M stands for Megabytes. For instance, 100M would be 100 megabytes. You can also create hard disk images in pure megabytes if you want, e.g. 30000M for 30 gigabytes.

G stands for Gigabytes. For instance, 100G would be 100 gigabytes.

T stands for Terabytes. For instance, 1T would be 1 terabyte.

P stands for Petabytes. For instance, 1P would be 1 petabyte. Unrecommended unless you happen to have a supercomputer handy.

E stands for Exabytes. For instance, 1E would be 1 exabytes. Unrecommended unless you happen to have a supercomputer handy.

And then when you combine them together, you get something like this:

If you're going to experiment with the arguments for a bit, you may use these commands for reference:

QEMU can recognize and read several different file formats, but this section will list the ones you can create with qemu-img.

The recommended file format. It is fast, dynamically allocated, and has decent support in QEMU. However it does have a minor speed loss compared to raw, but this is unnoticeable in normal use.

This is an older version of the qcow2 file format. The main difference between the qcow2 and qcow file formats is that qcow2 supports multiple snapshots through a newer, flexible model for storing snapshots. It is recommended to use qcow2 instead.

As the name suggests - it is a "raw" file format, which means it will allocate all the space to the disk immediately, e.g. if you formatted a file named raw with 2G as the size, it would take up 2 gigabytes of space on the disk. This is the fastest option, and is recommended if you have a lot of disk space to spare.

A file format which is also compatible with VirtualBox 1.1. Recommended only if you are going to be switching through VirtualBox and QEMU frequently.

A file format which is compatible with VMWare 3 and 4. Recommended only if you are going to be switching through VMWare and QEMU frequently. It supports the following arguments:

A Hyper-V compatible image format. Not recommended unless you're going to switch between Hyper-V and QEMU frequently.

A Parallels compatible image format. Not recommended unless you're going to switch between Parallels and QEMU frequently.

Not a file with any format - just a plain raw file.

Ancient, depreciated QEMU file format that is not present in newer versions. Like qcow2 and qcow, it is a dynamically allocated file format. This cannot be used in Win32. Not recommended.