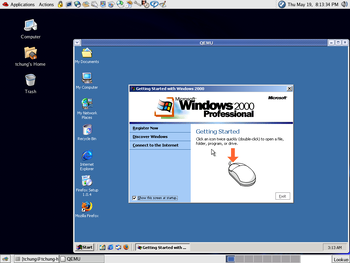 QEMU (Quick Emulator) is a free, open-source hypervisor and emulator that runs on several operating systems, including many major Linux distros, macOS, Microsoft Windows, BSD, as well as a few others.

It is capable of running pretty much all major x86 operating systems, including Windows, Linux, MS-DOS and BSD (and much more), and in addition is also capable of emulating other architectures, including ARM, MIPS, SPARC, PowerPC and MicroBlaze, there are also many forks of QEMU that add emulation of other systems like the Xbox, Z80 and Macintosh 128K.

QEMU is the only emulator supported in CollabVM 1.2. CollabVM 2.0 has a wider selection of virtualizers and emulators.

System emulation mode emulates an entire computer system, including peripherals. As mentioned above, it is capable of booting practically all major operating systems. System emulation mode is very slow (although faster than Bochs, at a cost of accuracy) - it should only be used if:

QEMU can run operating systems at near native speeds with KVM. QEMU still emulates the hardware, but the execution of the guest is done by KVM as requested by QEMU. You can enable KVM by adding -accel kvm to the startup arguments.

If installed, you can check if you are ready to enable kvm by checking the command kvm-ok.